On January 2nd, 2014, the second day of my term as Local Committee President (LCP) of AIESEC Cornell, I was awarded the JoAnn Boland International Scholarship.  This was a huge honor for me, and it was an opportunity that I was not going to waste.  I decided to attend EuroXpro 2014 in Poland.  The conference happened on the first week of April, and was also the week after my spring break.  So I was able to spend a week as a tourist in London and Paris, traveled to Warsaw for the conference, and spent the weekend after the conference in Madison, Wisconsin at the AIESEC United States National Presidents Meeting.

I started my adventure in Poland with a scare.  After being greeted in the airport by a Polish AIESECer, an AIESECer from Mexico and I attempted to find our way to the train station so that we could get to the conference venue.  However, when we got to the station we didn’t know which train to board, and couldn’t find the person who was supposed to be directing us.  We searched the station for a while without any luck, and right as we were asking to borrow a cell phone from a stranger we saw a group of travelers all wearing AIESEC shirts!  It was the Romanian delegation, and with their help we managed to find our way to the conference.  This was my first time connecting instantly with AIESECers in another country, and I bonded with the Romanian delegation throughout the conference.

The conference itself was amazing.  The delegates were all MC (national team) members and LCPs, so the content delivered was very high level.  Our facilitators were Member Committee Presidents and members of AI, and I even got to meet Rolf Schmachtenberg, the President of AIESEC International, and Vinicius Tsugue, his successor.  I felt the passion and drive of the entire plenary to achieve the goals set for AIESEC 2015 and to make AIESEC more relevant throughout Europe.  I got to talk to LCPs from around the world and learn about the problems that they face in their own local committees (LCs).  It surprised me to hear that many of the problems I was facing in my LC were shared by LCPs in other entities, and that I could learn about being a better LCP back home in Ithaca while I was sitting in Warsaw.

One of the biggest takeaways I had from the conference was how important collaboration between countries is to achieve our international goals.  At the conference we worked to start aligning the global supply and demand for exchange participants and traineeships.  This made me realize that so many times in the United States we were doing exchanges the wrong way.  If we want every exchange participant and traineeship to be realized we can’t just blindly raise and then cross our fingers that they’ll be matched in the future.  We need to understand what traineeships every country will be raising, and if we believe that we’ll have the best candidates for the position we need to make a promise that we will find those candidates.  With this approach, AIESECers can approach companies with a promise of the types of exchange participants who will be matched to the opportunity, and exchange participants can be recruited through very focused marketing and will know exactly what is available for them.  Country partnerships and LC-LC partnerships are essential if we want AIESEC to provide high quality experiences.  At EuroXpro I saw what a huge demand there is for exchange participants from the United States, and realized that AIESEC US has endless room for growth.

My other major takeaway was realizing how different AIESEC is for countries and entities around the world that are geographically smaller than the United States.  In the US there’s definitely a divide between the MC and the LCs.  In other countries that isn’t as much the case.  Members of the MC can interact with LC members much more frequently because they’re only a train/bus/car ride away.  Rather than having a culture where strategy is coming “down from the MC,” these entities are able to work very collaboratively to make sure they’re growing in the best way possible.  Although the United States can’t just shrink itself down in size, I saw how important that collaborative spirit is for our future, and have tried to embrace it during my term.

EuroXpro was a chance to get outside my personal AIESEC bubble, and to see what opportunities might be waiting for me after my term.  Since the start of my LCP term I’ve flirted with the possibility of running for MC, and EuroXpro taught me a lot about the MC experience in countries and territories outside of the United States.  After the conference I know that if I do join the MC in the United States that working with the LCs would be my #1 priority.  I haven’t decided what comes after graduation yet, but this conference meant a lot to me and was the time I felt most connected to the AIESEC network.  Thank you AIESEC Life for the opportunity. 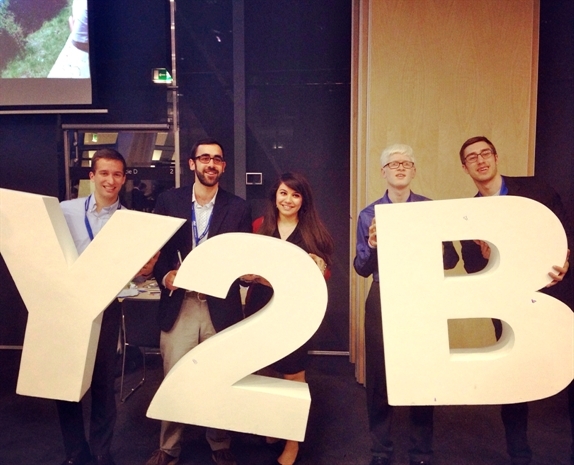 Or
If you have linked your account to one of the following social networks, please click on the relevant icon to log in
Not a member yet?
Join Us